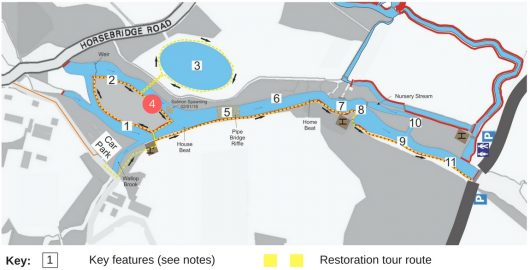 Please use the following links below to discover more about the Bossington Test reborn project.

This section describes the works undertaken on the lower half of the upper ‘House’ beat as identified by (4) on the T&I Tour map. It extends from the yellow tour route across the river which is shown on the map, downstream to its confluence where the two braided water courses come together as seen in photo 25. This confluence marks the start of the main ‘House beat’ river section, downstream to the weir.

Photo 24 is an upstream view of the ‘House beat’ middle-section as seen by a typical visiting angler during a day’s fishing at height of the mid-summer dry fly season in June.

Photo 25 shows the upper House Beat branch as it confluences the main river Test with the Wallop Brook branch coming in from the left.

Both images were taken during the initial site assessment two years before restoration works were implemented. The heavy sedimentation, languid flows and total lack of weed growth is entirely due to the backing up effect of the double weir system (see (8) on the map), some 300m further downstream.

Photo 26 features a corrugated-iron silt hurdle prior to weir removal in the slow-flowing, over-wide and over-deepened channel.

Photo 27 shows the same hurdle after weir removal. The drop in water level following weir removal is approximately 20cm/8” as evidenced by the exposed hurdle and calcium stain at the base of the bankside sedge. Flow velocities did improve following weir removal but were insufficient in the over-wide and straightened channel to flush out the huge volumes of sediment and over-lying algal blooms.

Photo 28 shows the long view down this degraded lower section of the upper House beat following weir removal. The sedimented bed is heavily impacted with blanket weed (Cladophora spp). The angler access bank seen right of shot is ‘perched’ and significantly higher than the surrounding floodplain so the plan was to lower it into closer connectivity with the new long-term water level. Perched banks with a cliffing face, with nettles and scrub growing in close proximity to the river’s edge are sure signs that the channel has been historically dredged. These features are widespread throughout the T&I catchment.

Silt hurdling is an ancient management technique that is still widely used today. The practice no-doubt dates to an era when watercourses were diverted away from their naturally- scouring gradients, to service mill leats and land irrigation needs. These man-made watercourses require(d) constant maintenance to rid them of unwanted sediment as do the over-widened and over-deep main river channels. This is a constant and losing battle as hurdling seems to do little more than re-arrange sediments within the central channel. This project, conversely, is based on the simple premise of a self-cleansing watercourse where sediment is flushed out and beyond the project area by re-energised flows.

Photo 29 A single ‘scoop’ of Cladophora algae or Blanket weed from the upper Hampshire Avon during late summer demonstrates just how profuse this algal invasion can be. Frank Sawyer talked about its negative effect when thousands of invertebrates rolled up in its giant net were lost downstream during floods. This scenario is widespread throughout the chalk stream region and is closely associated with former dredging works, over-wide channels, deep sediment deposits, high summer water temperatures, sub-optimal flow velocities and phosphate-driven eutrophication.

One of the estates primary concerns leading to the decision for a major fishery overhaul was the deteriorating quality of trout fishing following the Mayfly hatch in June when warmer summer temperatures created a ‘stressed’ in-stream habitat. Rising water temperatures coupled with high phosphate levels and an almost total lack of Ranuculus weed rendered most of the beats barely fishable during the second half of the season. Up-winged fly hatches were reported to be virtually non-existent.

The primary objective in this reach was to re-size the linear over-wide channel and replace it with a double meander sequence and raised gravel bed to increase flow velocity and bed scour.

Photo 30  The existing access bank was made up of piled up dredged river bed gravel.

We knew from our site investigations that the piled-up and artificially elevated right-hand access bank was formed from dredged river bed gravels. But it was nevertheless interesting during the actual works to see this legacy of past river engineering being cut into to form a new meander using heavy plant. We can look more closely at the vertical face of this relic feature during 2018 autumn river walk to get an idea of just how much material from river beds was removed during these ‘Land Drainage Improvement’ works. With the drop in water levels following weir removal, a new outside meander bank profile was cut into this solid gravel bank to form the upper half of the new double-meander sequence. Gravels excavated from the original river bed were partially used to form this new feature.

Photo 31  Downstream view – A new outside meander was excavated into the RH bank angler access to compliment the existing inside bend formed by collapsed willow trees.

Photo 32 Upstream view – Existing root stock from the original bank margin was stockpiled at the start of grading works and re-planted in a shallow trench at the toe of the new low-level access bank.

The following aerial images feature the upper and lower sections of the new double meander sequence completed on 11th December.

Photo 33  This image features the upper half of the double meander sequence and illustrates the way in which the new outside bend was sculpted around an existing in-stream collapsed willow tree feature. These existing, stable and high-value marginal habitat refuges are heavily accreted with sediment and are best served by incorporating them into a complimentary design. Had this feature been located on the opposite bank it would have been equally possible to reverse the entire meander sequence, top-to-bottom, to compliment it.

A – Extent of bank reclamation to optimise channel width. This low-lying inside meander was back-filled with a 500mm deep sediment blanket, graded off the river bed prior to re-dressing it with fresh site-won gravel.

‘X’ marks the spot where on 02/01/18 just three weeks after project completion a hen salmon was observed cutting a large redd on the recently-placed gravels. The up-welling of the 2m wide redd can be clearly seen.

Given the severely impacted conditions existing in this reach prior to project commencement, it is unlikely in the extreme that any attempt or successful outcome of salmonid spawning has occurred at this location for many decades, or indeed for the entire period (150 years+?) that has lapsed since the weirs were installed. This is due to exceptionally heavy sedimentation, sub-optimal flow velocities and a 100% absence of suitable spawning gravels (20mm to 60mm). The fact that a salmon was observed spawning at this location on 2nd January 2018, just three weeks after project completion, is testament to natures powers of recovery. This spawning event provides the first and early response to the T&I members enquiry, “how long will it (the project site) take to recover”?

The following gallery shows some further images of the completed project.