The bank erosion and wall collapse were risking blocking the culvert.

“After this latest February/ March spate of awful weather, rain rain, rain and yet more rain!, I thought I had better check on any damage done by the very swollen and fast-flowing Avon to the bank reinforcement done by ‘Cain’ at the back end of last year. I haven’t yet been able to do any planned fern plantings, so was worried about the new topsoil being washed away, as the river has been constantly above red markings on measuring stick for at least six weeks.
I am pleased to report that a little bit of self-seeding has naturally  happened, but the bank, soil and supporting structures, have stood amazingly firm,  the watermark delineating how far the water climbed up the new bank face is clearly visible, so great job and many thanks.”

A short section of hard engineered bank upstream of a culvert inlet within the grounds of Burgate Court, Fordingbridge. had partially collapsed into the stream. The bank erosion and wall collapse were risking blocking the culvert, which could have led to localised flooding.

Temporary works using concrete and sandbags had been installed to protect against any further short-term erosion but a more robust permanent solution was urgently required. Cain BioEngineering was commissioned to design and build a long-term solution to protect against further bank erosion and masonry collapse.

The true left bank of a River Avon carrier channel had partially failed (and collapsed) where scour had occurred behind a section of hard engineered bank (stone, brick and mortar) located upstream of an arched culvert inlet. The bank has been temporarily repaired by residents of Burgate Court with concrete and bag work during the summer of 2015.  The temporary work has stabilised the stream bank in the short term (i.e. during existing low flows), however, the Environment Agency recommended that permanent bank repairs were undertaken to protect against further destabilisation of the bank during future high flow events. 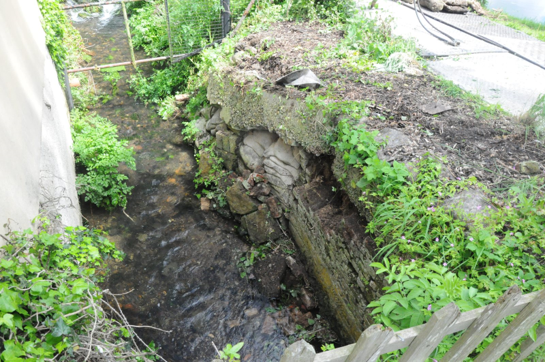 Before: Eroded hard engineered bank upstream of a culvert inlet within the grounds of Burgate Court

The solution chosen involved repairing and repointing the upper section of the brick wall and the installation of two tiers of geotextile-retained ‘coirnet’ revetment.

The use of a flexible geotextile retaining material ensures the structure is both robust and has the ability to adapt to the movement of the river bed, unlike gabion baskets which quickly fail when the bed of the river moves. The chosen solution was designed to rapidly vegetate both on its slope and vertical face whilst remaining highly resistant to wash-out and scour. 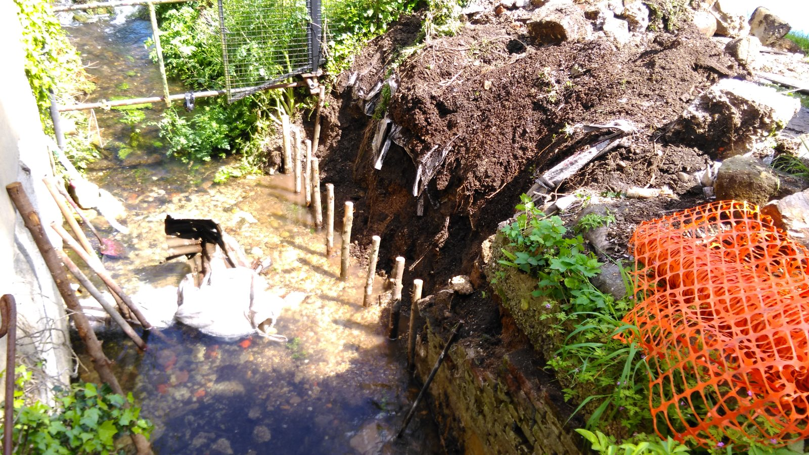 During – Temporary bank protection is removed and the bank is staked out with hardwood posts. 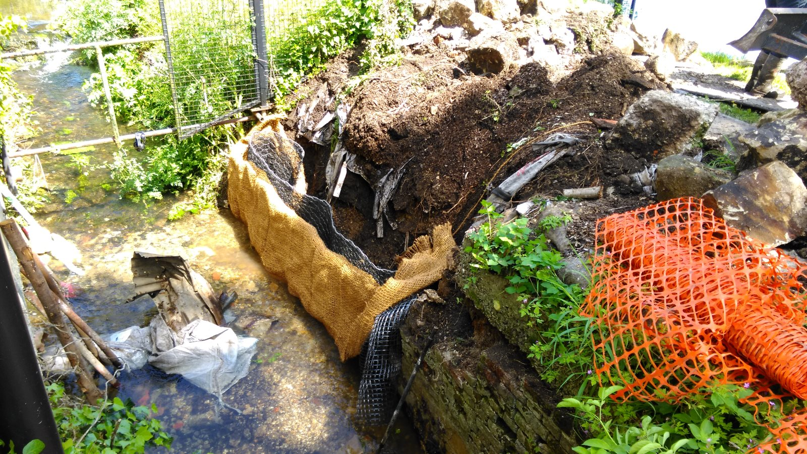 During – Installation of a flexible geotextile to retain the soil behind. 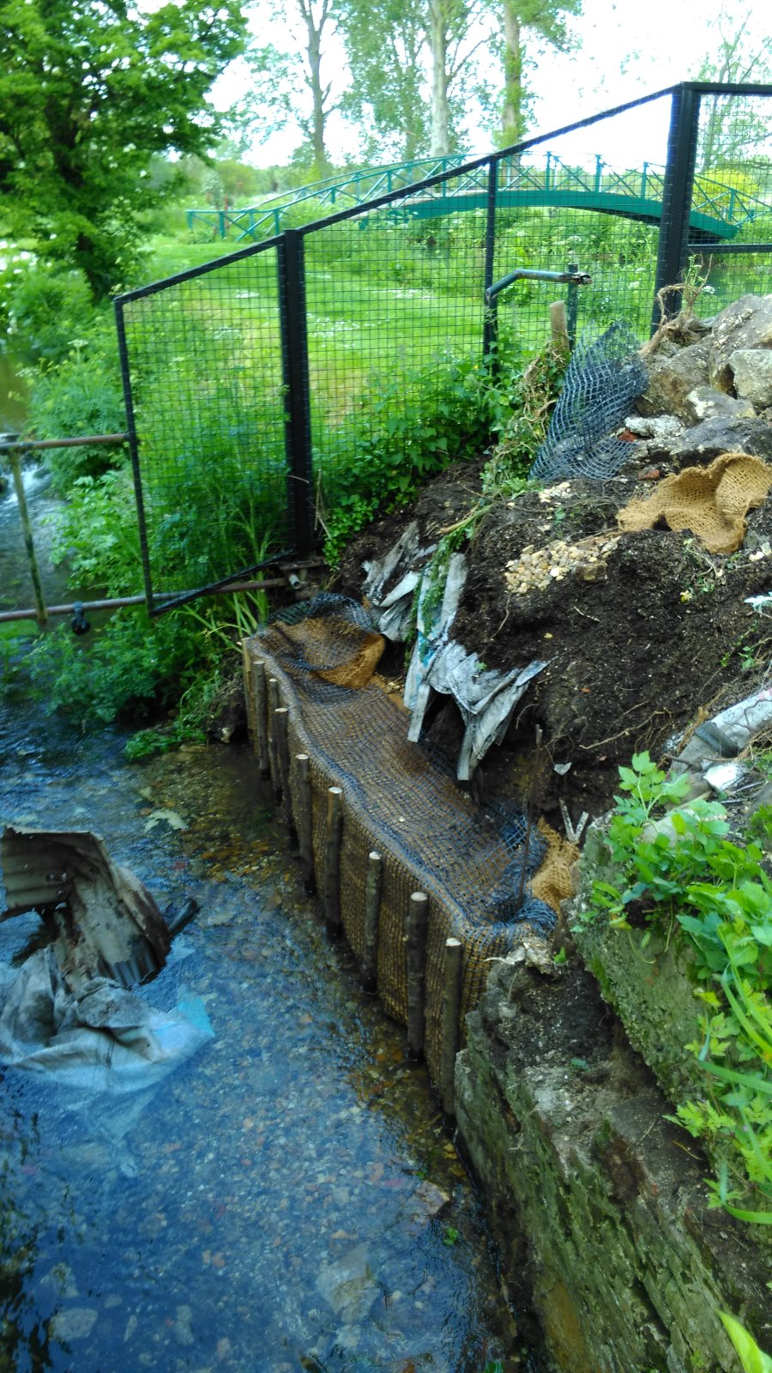 During– completed the first-tier revetment. 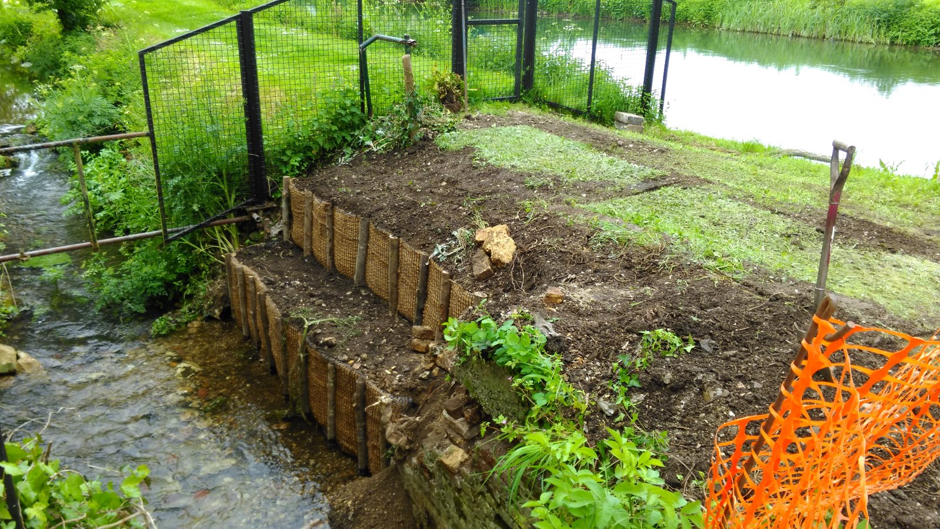 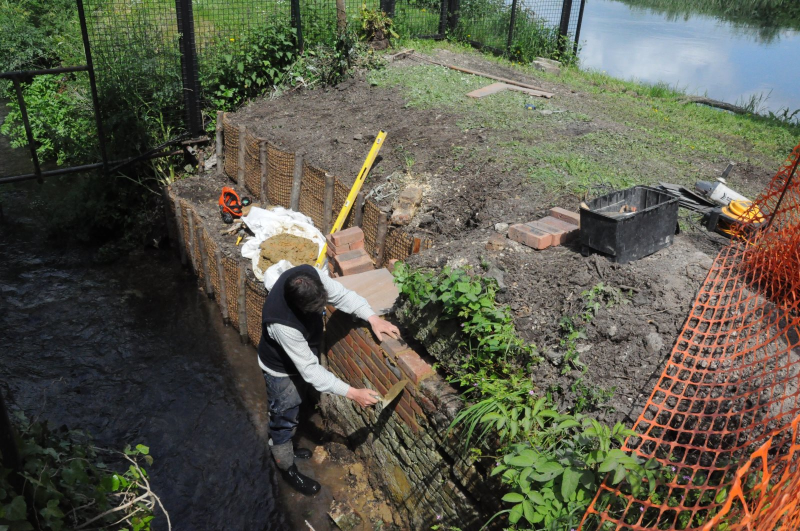 During – repair and repointing of the brick wall above the solid stone foundation. Where feasible existing bricks were cleaned and reused.

The completed works successfully reinstated the eroded bank margin around the culvert utilising a robust and aesthetically pleasing solution, which combined both hard and soft-engineering techniques. 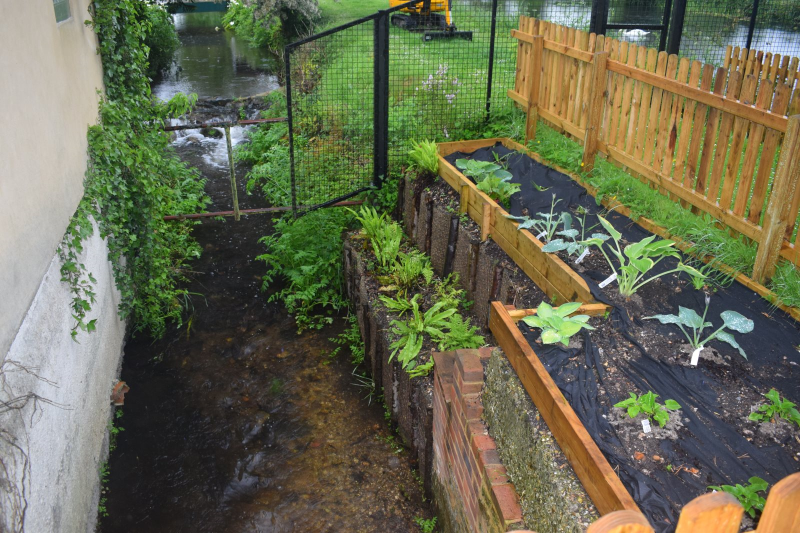 After –The completed revegetated banks.